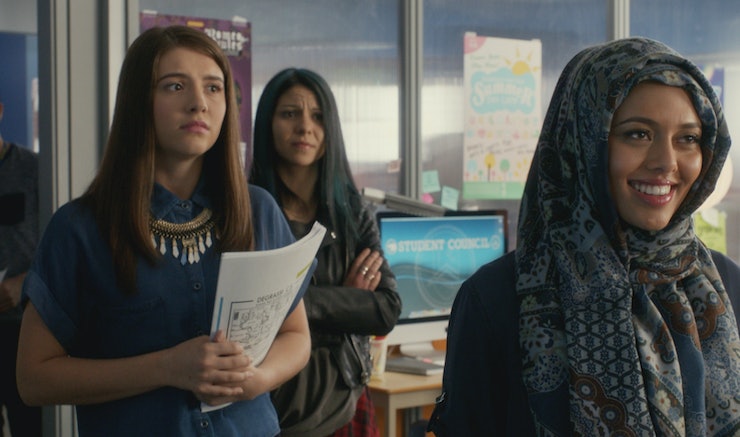 Degrassi Next Class came back with a riveting season filled with drama, relationships and darker elements than ever before. I binged the whole season in a day and the final episode was extremely intense. Before you read on, there are spoilers below!

Zoe’s Sexuality: Zoe’s sexuality was one of the highlights of the season. It’s incredible that we see her come to terms with her sexuality in the final episode of season 2. In season 3, she embraces her sexuality, which is amazing to see after trying to avoid it for so long. She’s the strong female leader I always knew she would become after seeing her bully people for years. She’s using her powers for good by taking over Tristan’s presidency and being a awesome support for characters like Grace, Miles and Winston. However, her storyline focused on the relationship with her mother. It’s sad to see Zoe mistaken her mom’s denial for acceptance, and the fact that she was kicked out of her house following her mother’s wedding is brutal. It’s funny how all these former flames of Zoe’s end up being her support throughout her relationship with Rasha. I love her friendship with Grace and Winston, and I’m liking the budding relationship between Rasha and Zoe. There’s a lot of complexity to their relationship that goes beyond sexuality, and I’m excited to see it unfold.

Maya’s Depression: Maya’s spiraling was intense and uncomfortable, but at the same time, I couldn’t wait to see Olivia Scriven’s acting chops come into play. Her character is known for being the voice of reason and the generally positive bubbly girl from the bunch. But Maya isn’t that girl anymore, and she becomes frustrated that she can’t flip a switch. I can’t relate to Maya’s depression, but I totally related to her wanting to go back to when she was in a happier place. So she tries going back to Grace and Zig, but it just didn’t work for her. Seeing Maya’s anger toward her mom was unnerving and while it was nice to see the return of Katie, I knew there was more to the story. In its conclusion, I had no idea what was going to happen, and I honestly thought there could be a chance she jumped from the building. Seeing all her friends in the hospital crying was a tender moment, and I’m interested to see Maya’s recovery.

Lola’s Abortion: Lola’s abortion was the hot topic of this season. I know some people will watch it and be horrified by how casual the whole episode was about the subject, but that was the point of the episode. Sometimes it isn’t this dramatic scene where she’s sobbing right before the procedure. In the earlier generation of Degrassi, Manny had an abortion storyline that caused controversy because she wasn’t emotional right before her abortion. I really appreciate the writers sticking with their beliefs, and if I’m being biased, it’s because my beliefs happen to align with the episode. Lola was entitled to get the abortion because it’s her body, and she shouldn’t have to feel anything if that’s not what she’s feeling. It was told with uncertainty throughout the episode, but I was happy to see Yael being the surprise support system for Lola. People might not agree with what she does, but I believe that’s our reality today. And the fact that she owned it was commendable.

Grace’s Health: Grace’s story was perfectly summed up by Jonah who says at one point. “All this time, I thought you were afraid of dying, but it’s living that you’re afraid of.” It’s easy for Grace to just shorten her life by refusing the surgery, but like most people, she fears the future. What drives the episode home is Maya’s limited role toward the end when Grace realizes she’s not even close to embracing death the way Maya has been all season.

Frankie and Jonah: Frankie and Jonah’s relationship was tested in the sleepover episode, where Frankie decides it’s time for her and Jonah to have sex. Everything about Frankie’s neediness is something many girls can relate to. She’s insecure about being immature and constantly puts Jonah on a pedestal. Her relationship was on Jonah’s terms in many ways. The ironic part being that they just want to make each other happy, as we later see Jonah vent to Grace. Her obsessive behavior is definitely something she needed to take a step back from, and it was very mature of her to take a break from him.

Tiny and Shay: Tiny and Shay are in many ways an unlikely couple. I love the episode where she’s insecure about her period and the sleepover episode. For me, it depicts all of Shay’s insecurities in two episodes. Between Lola and the experience Tiny already has, we see her struggle to keep up with her relationship. They make it through alive, which is an accomplishment after this season.

Esme in General: Esme is the girl people love to hate as they watch this season. She really is awful and clearly has issues getting along with other girls. The way she bullies and talks to Shay and Maya in such a demeaning manner is something we haven’t seen in a while.

Miles and Tristan: Tristan is MIA this season, but it leaves Miles in a total dilemma of whether to move on or stay by his side. My favorite scene was when he was crying for Tristan to wake up as Zoe embraces him for comfort. When Tristan returns, we’re left with the mystery of whether Tristan knows about Miles and Lola. As far as Lola being his support, it made a lot more sense and their friendship seemed natural. They’re extremely unlikely but they started liking each other through their own despairs. When they hooked up, the morning after scene was tender but still telling of Miles’s guilt.

Yael and the boys: Hunter and his friends were used humorously this season as they had several funny light-hearted storylines. I appreciate the innocence they bring to the show. I loved the sleepover episode because the dynamic between Hunter, Vijay and Baez brought me back to Toby and JT episodes. I also thoroughly enjoyed Yael’s makeup storyline as two females put her in her place for shaming women who use makeup.